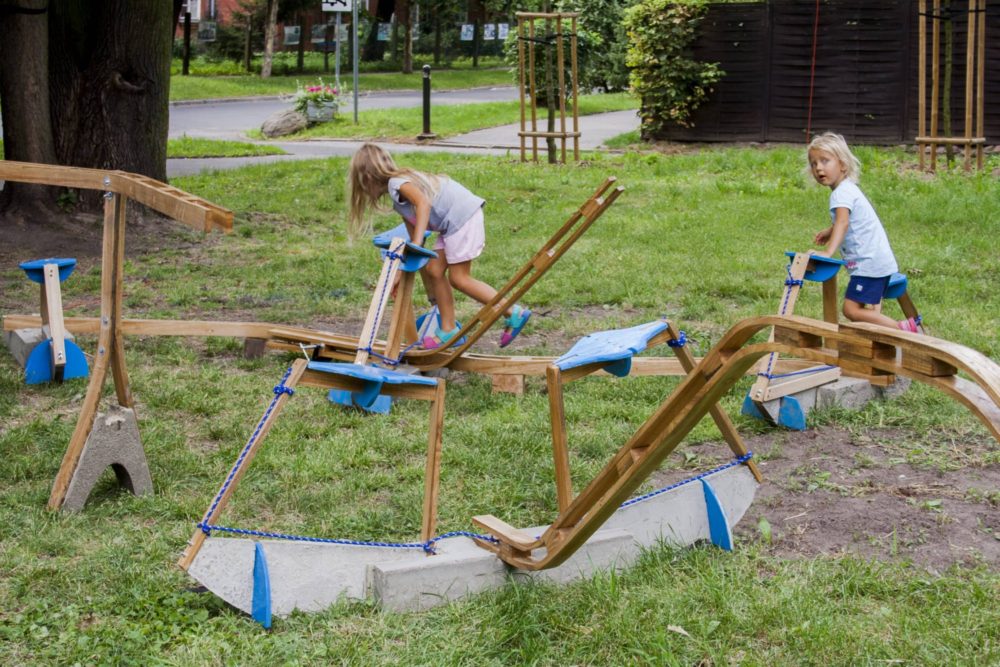 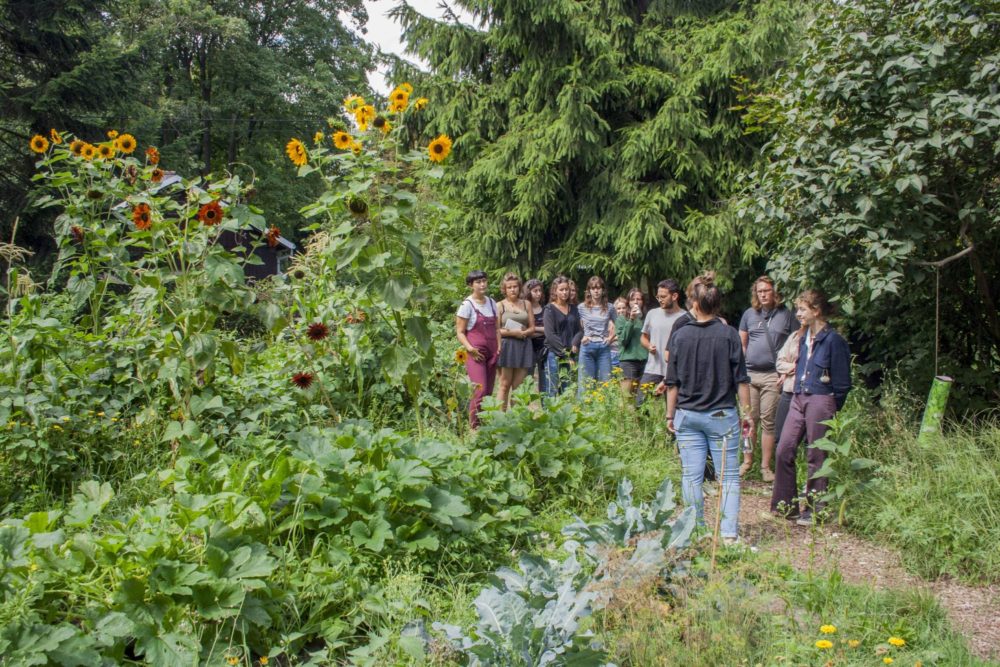 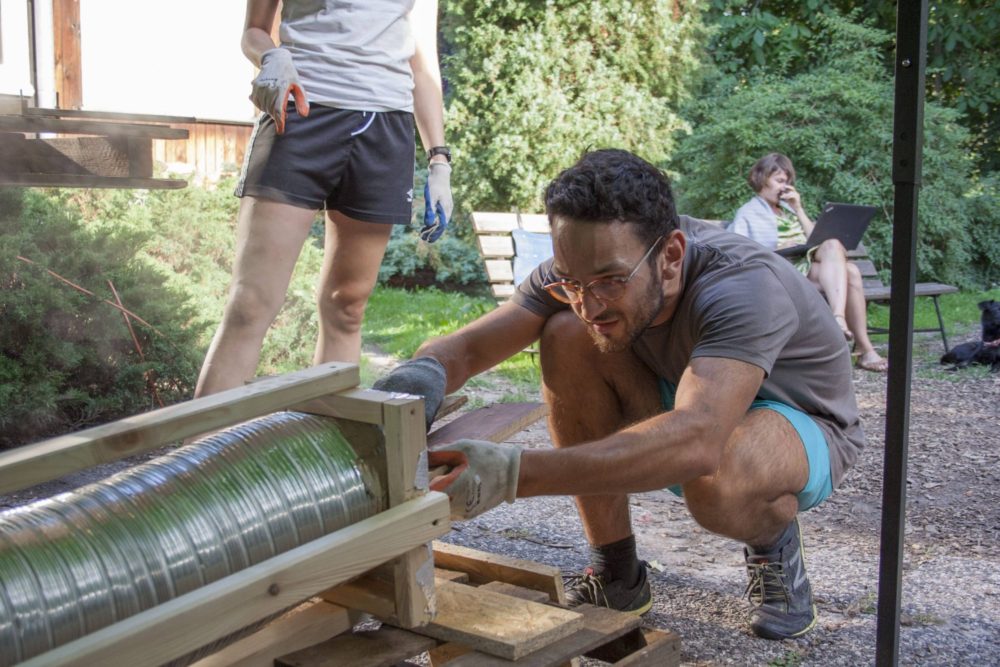 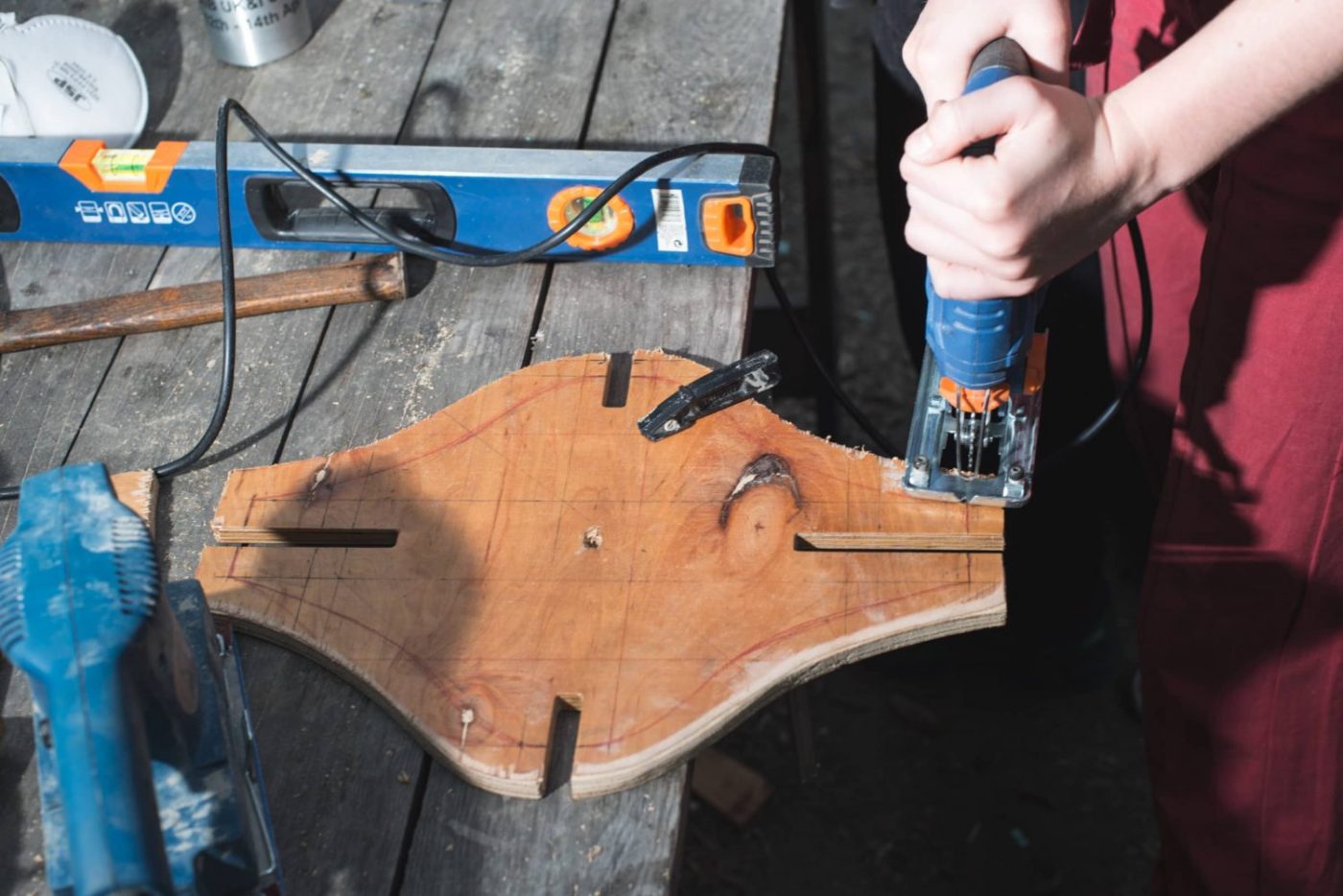 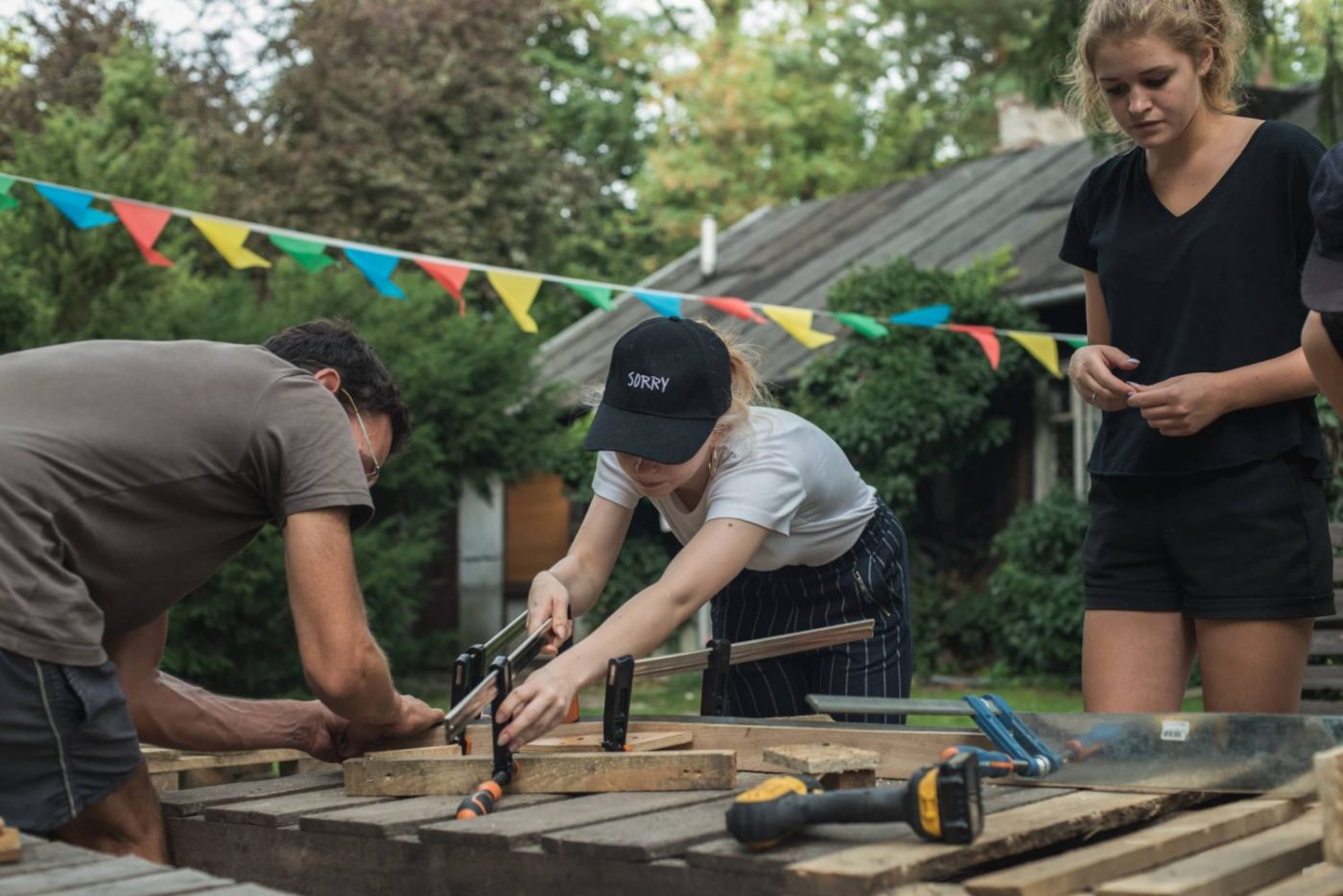 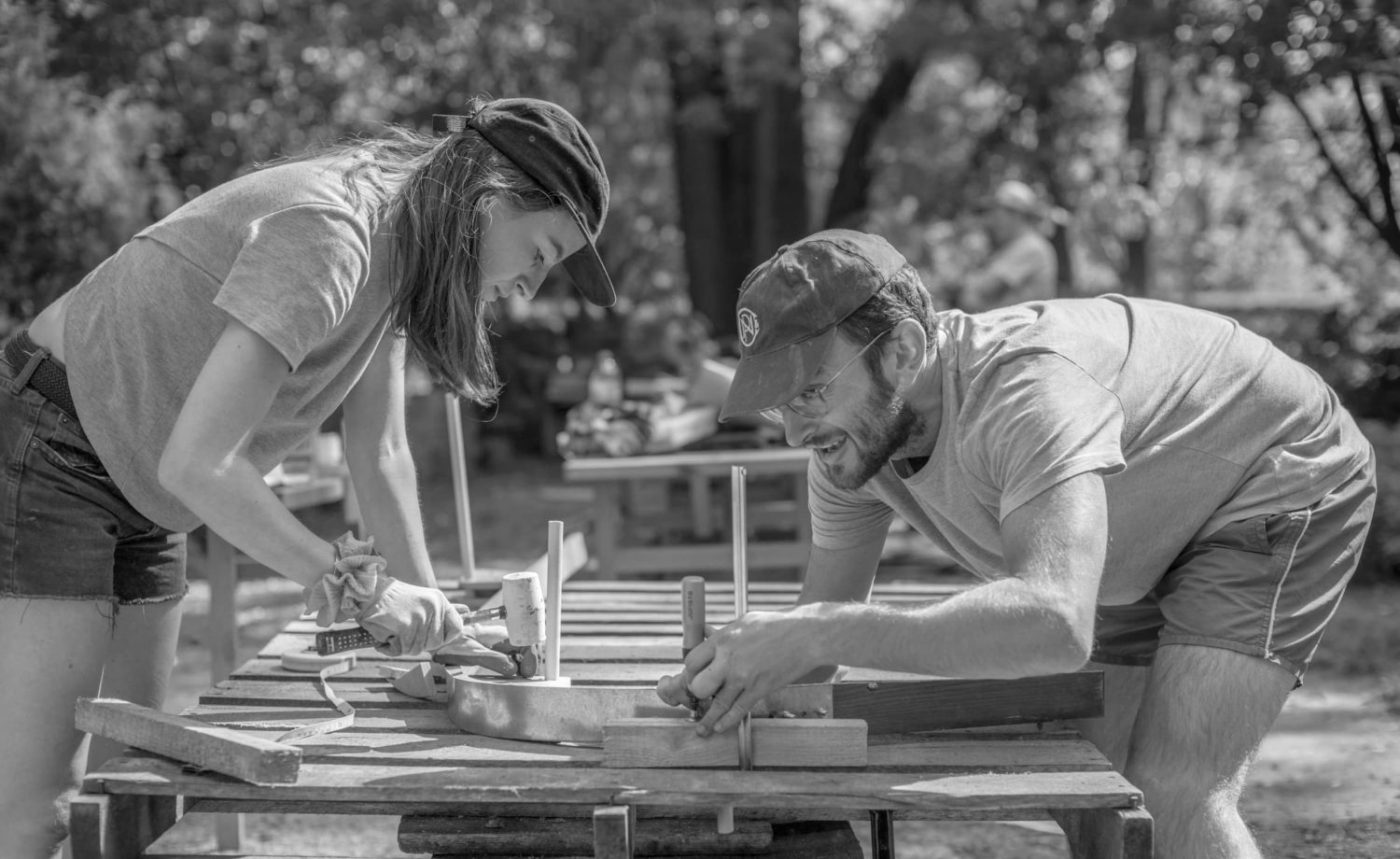 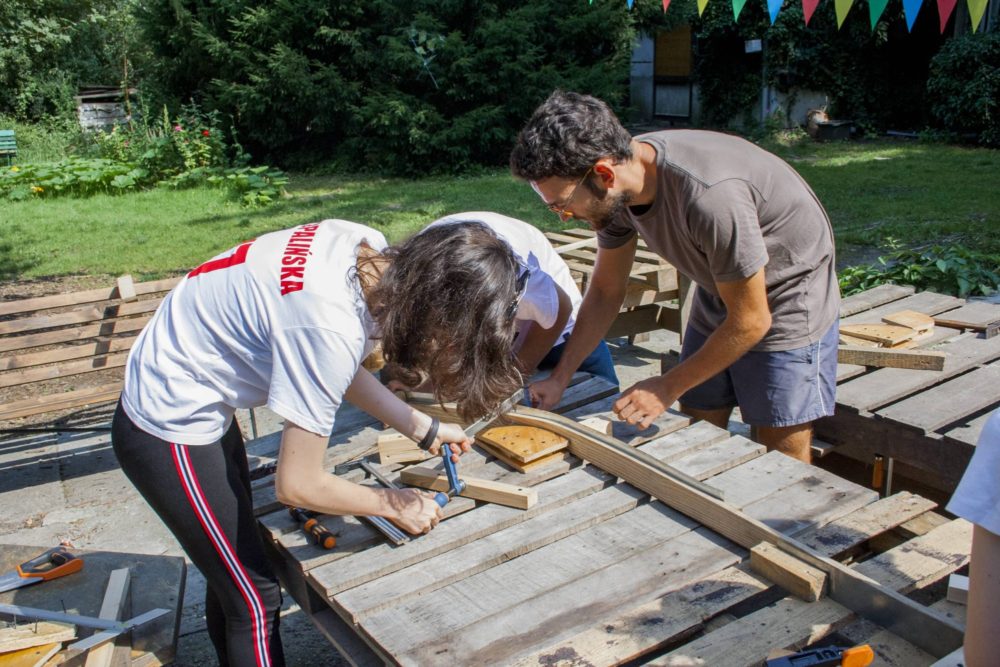 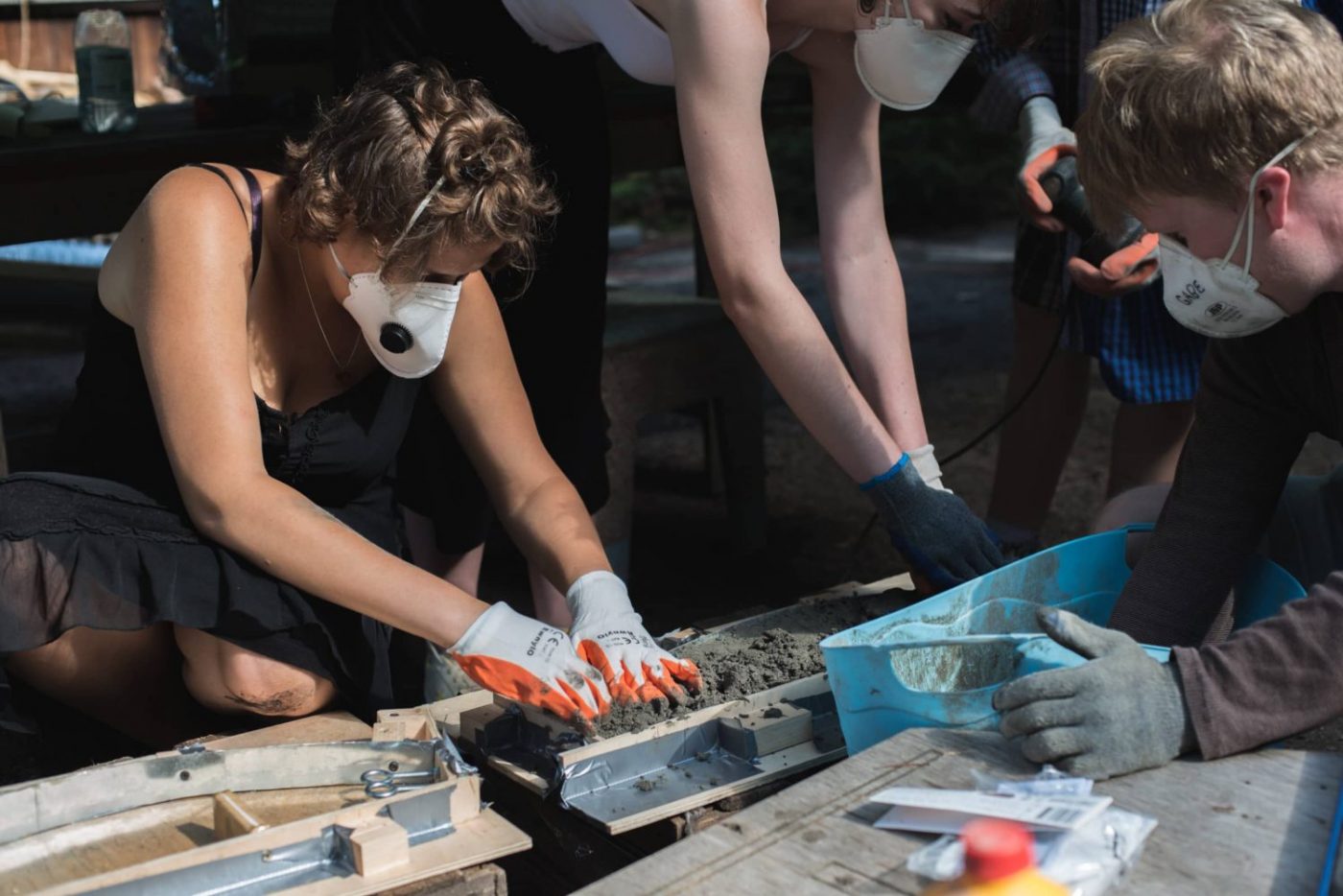 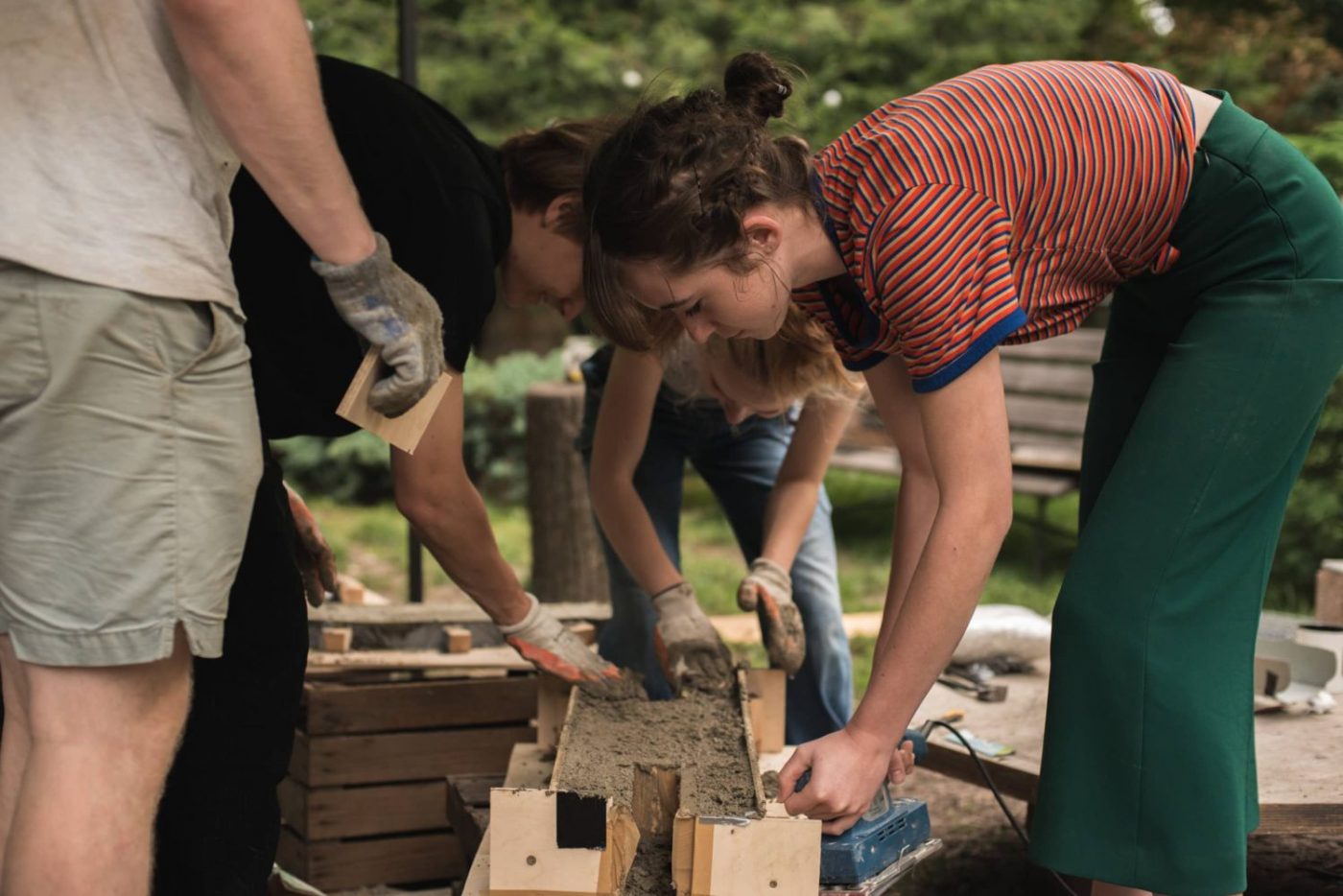 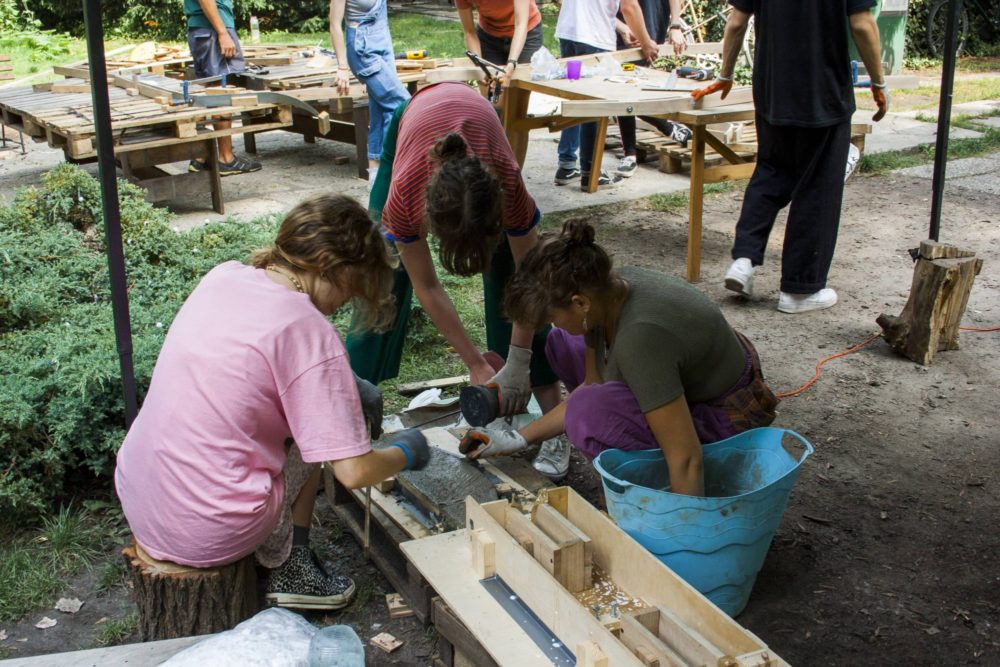 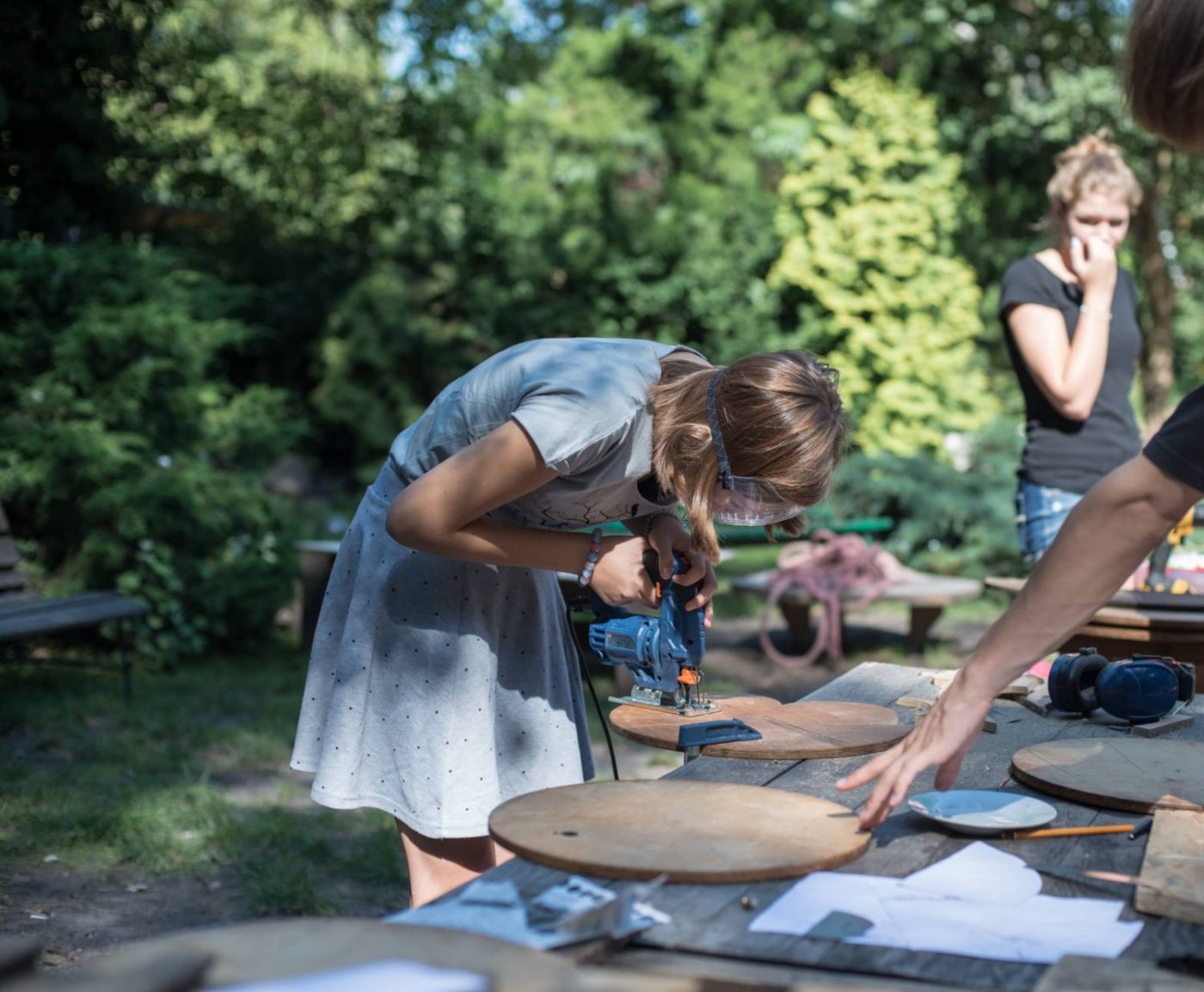 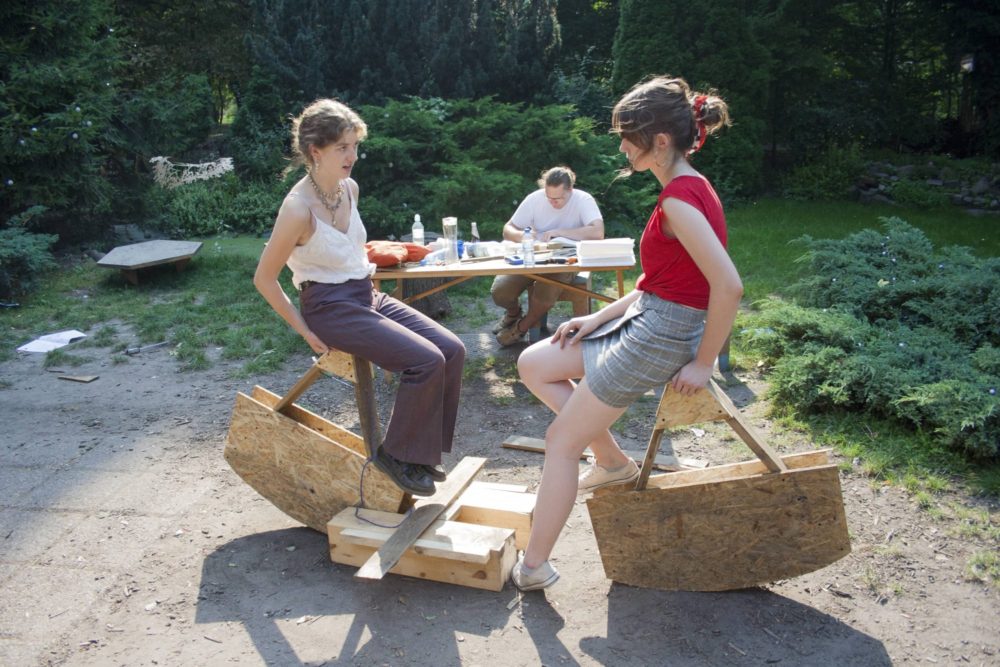 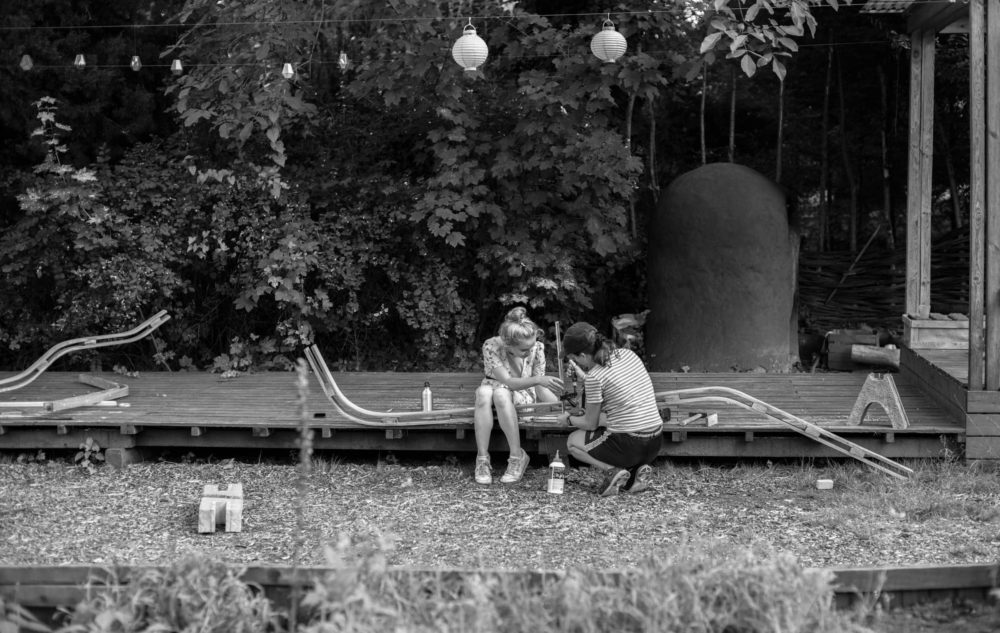 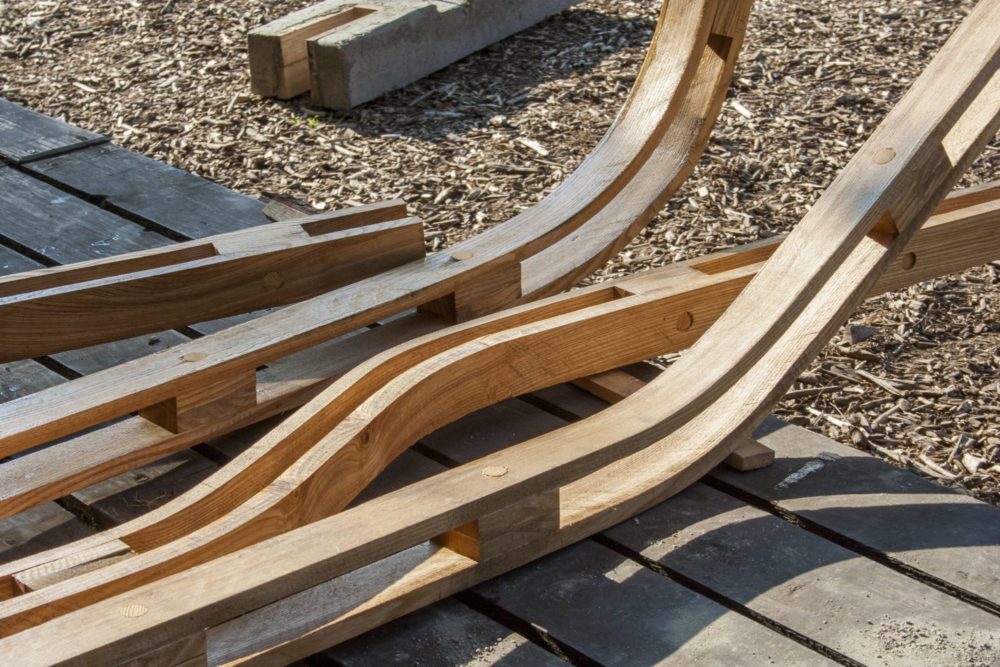 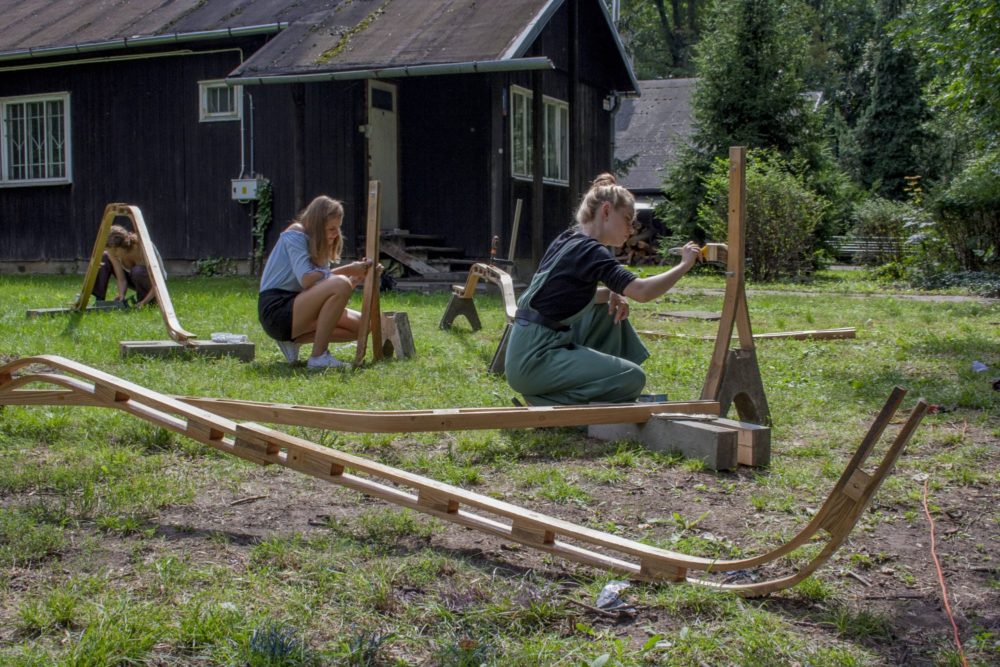 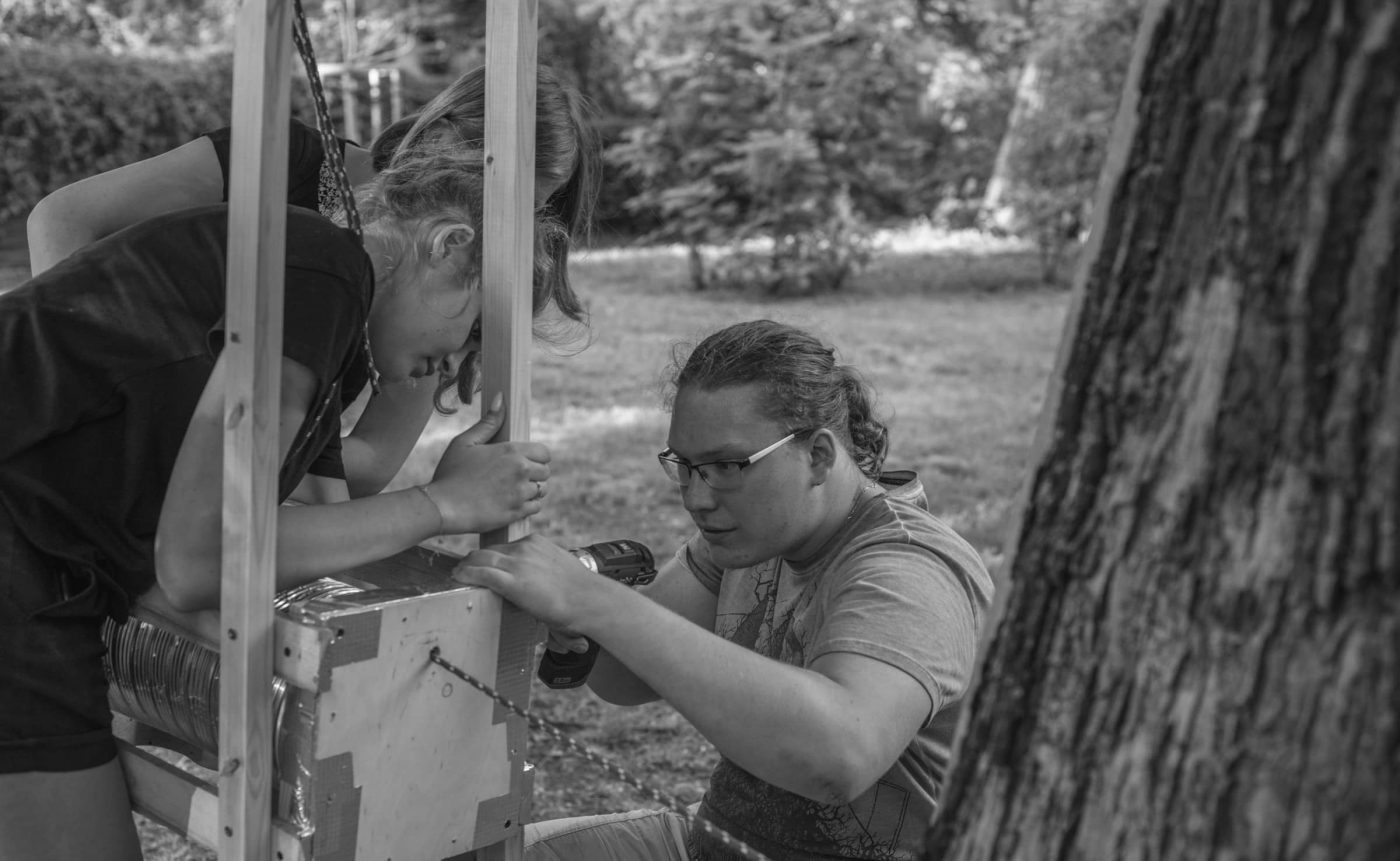 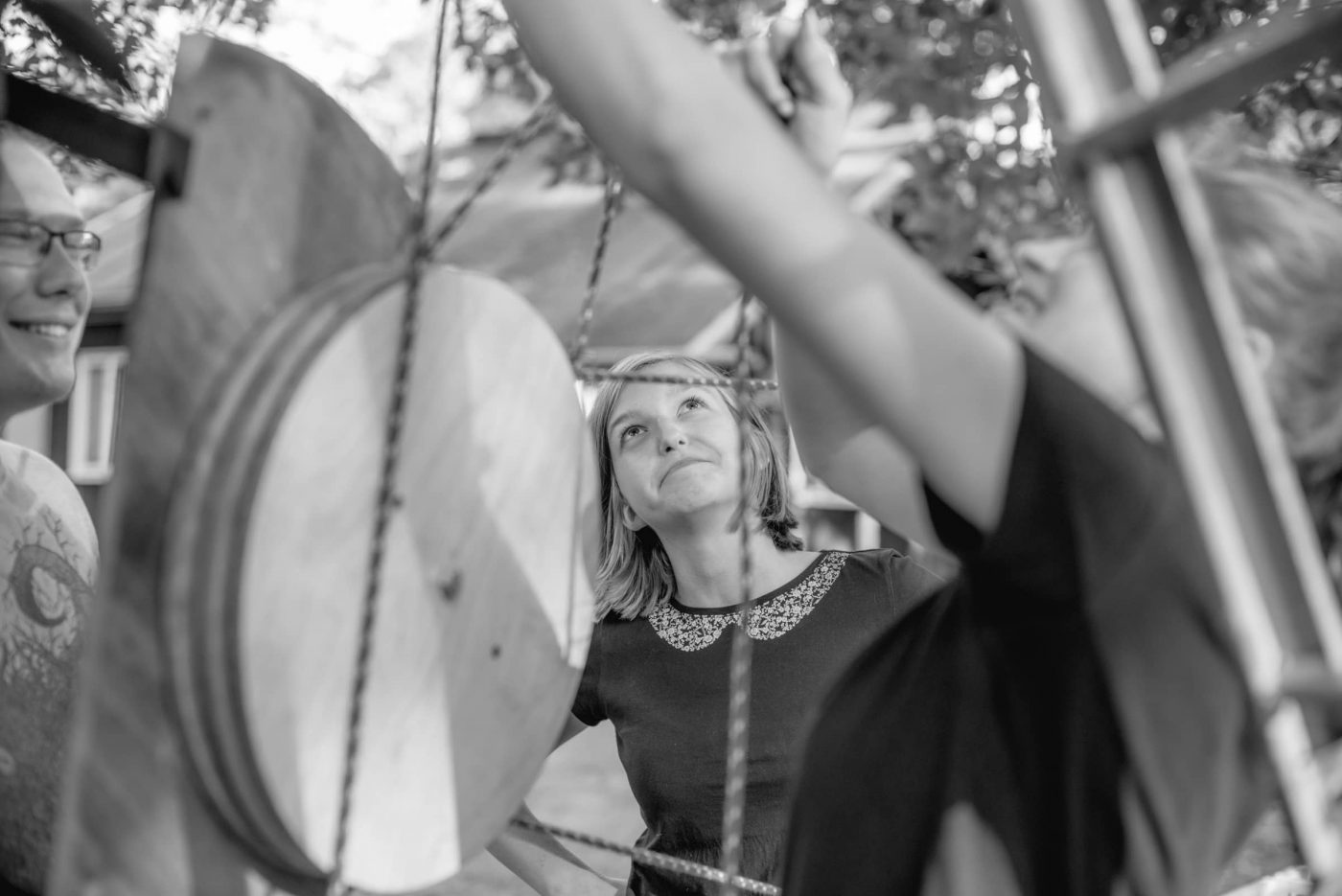 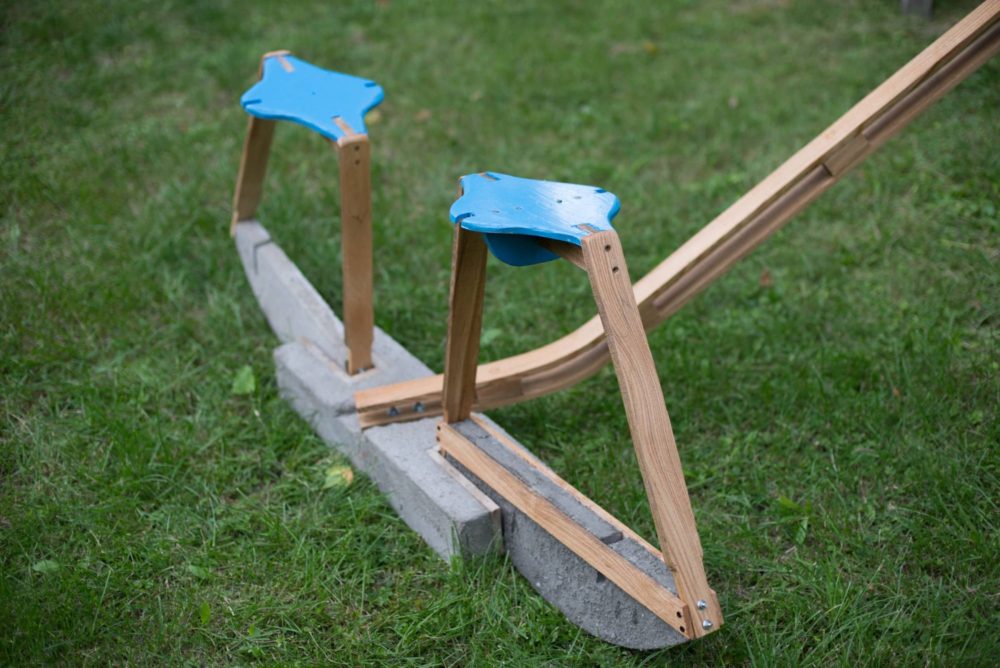 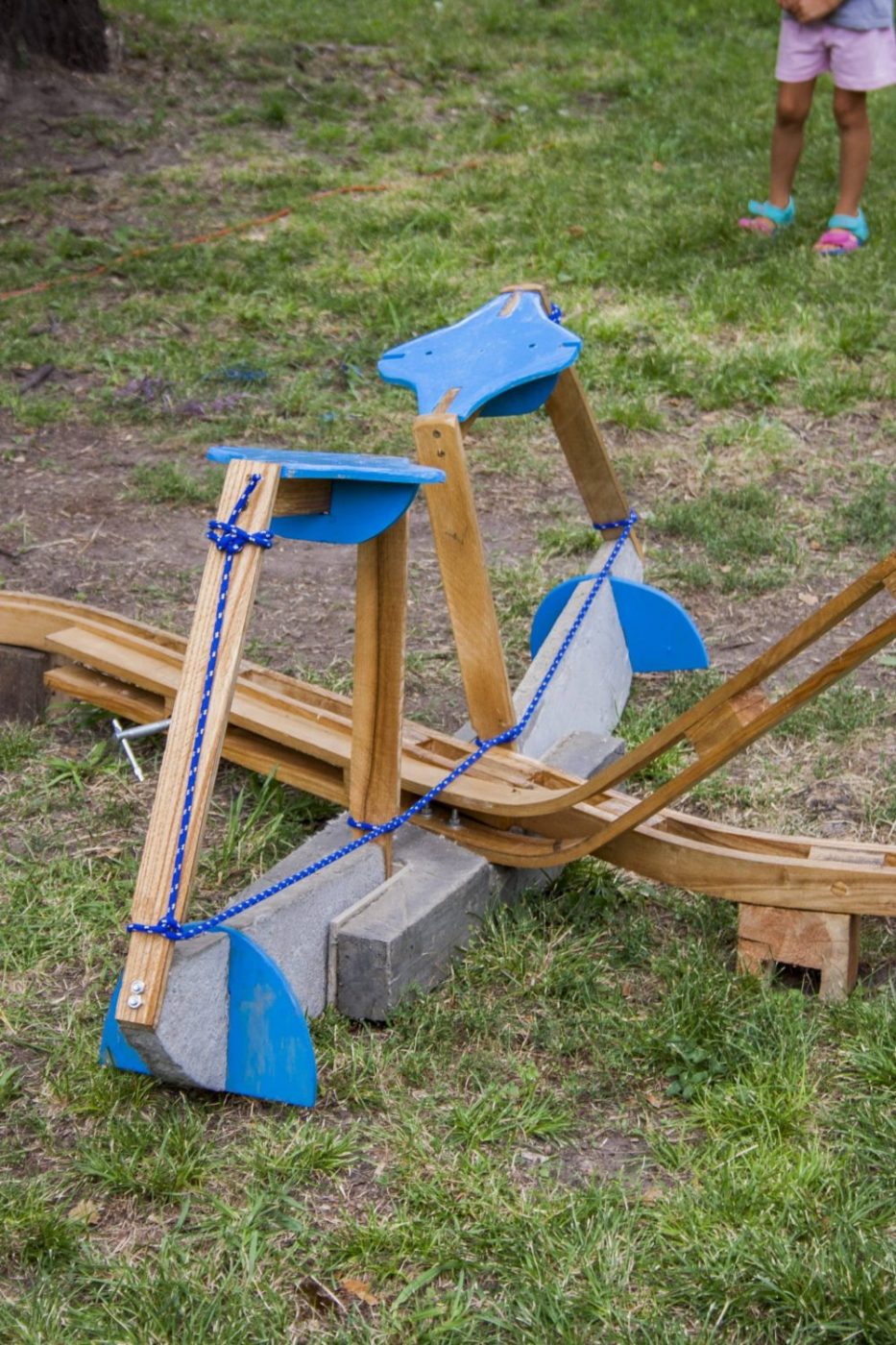 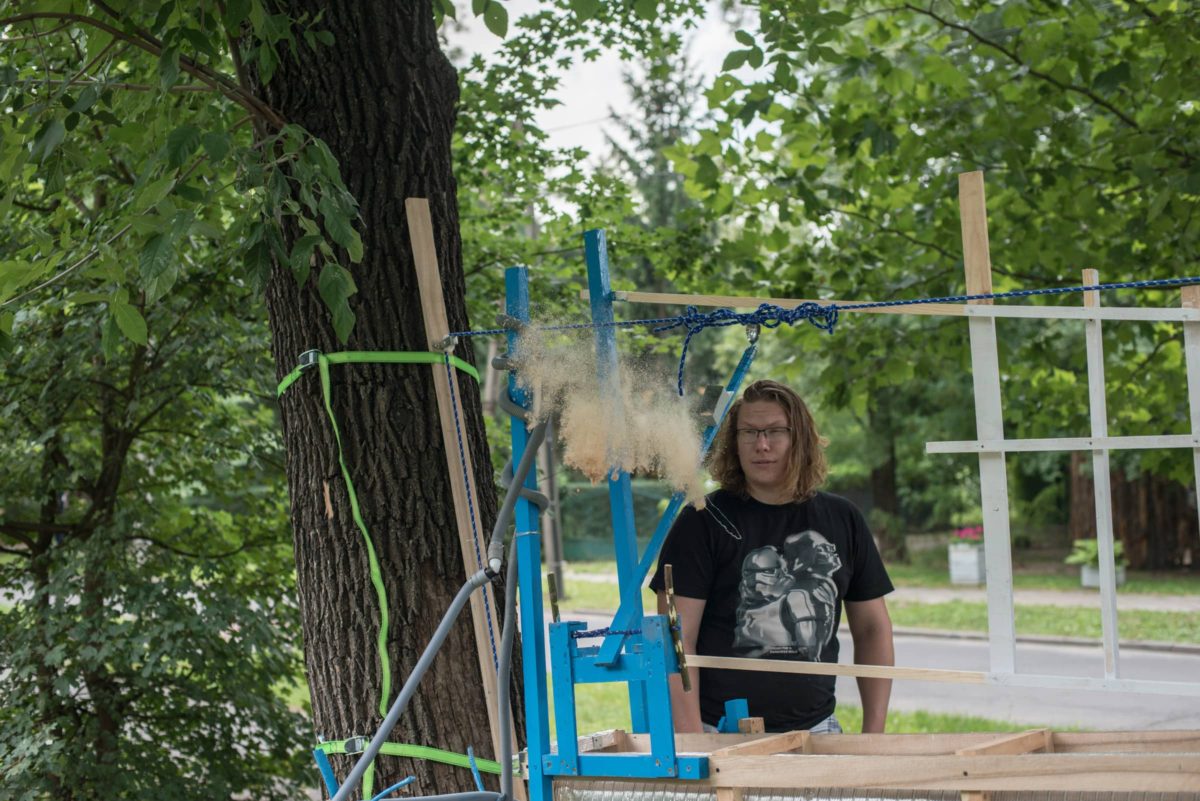 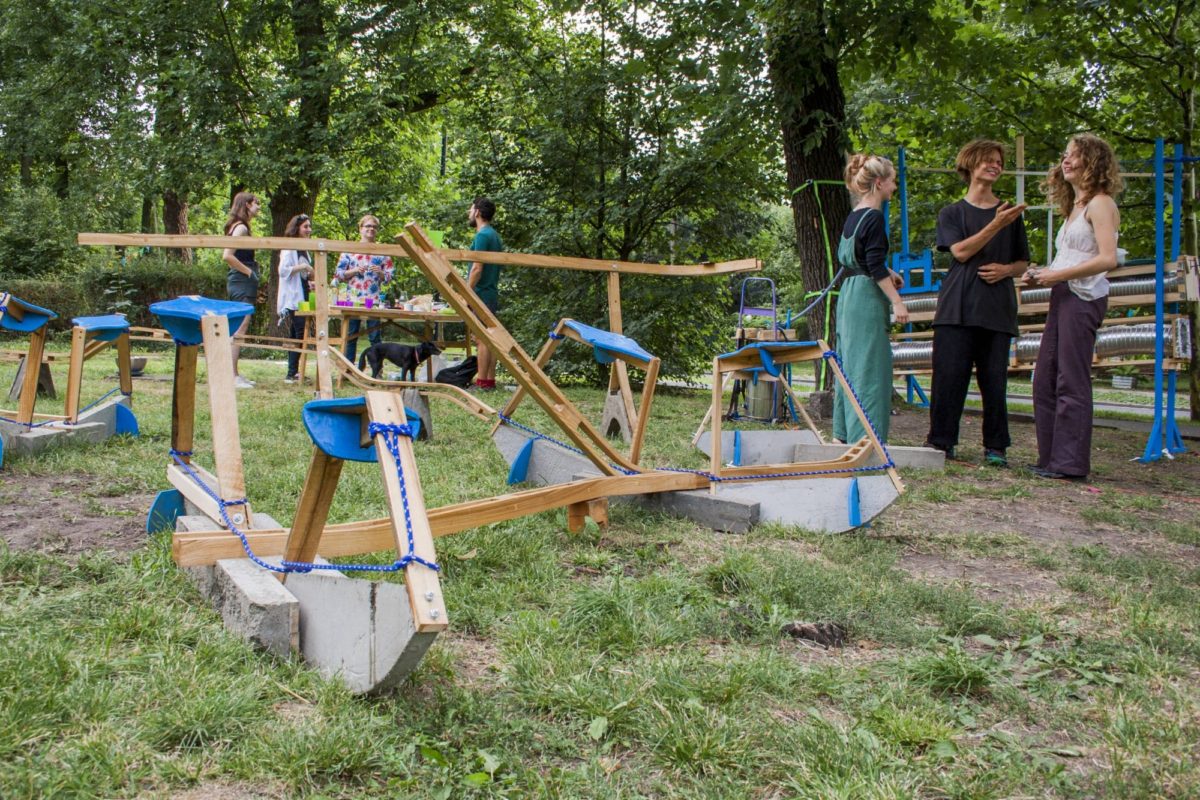 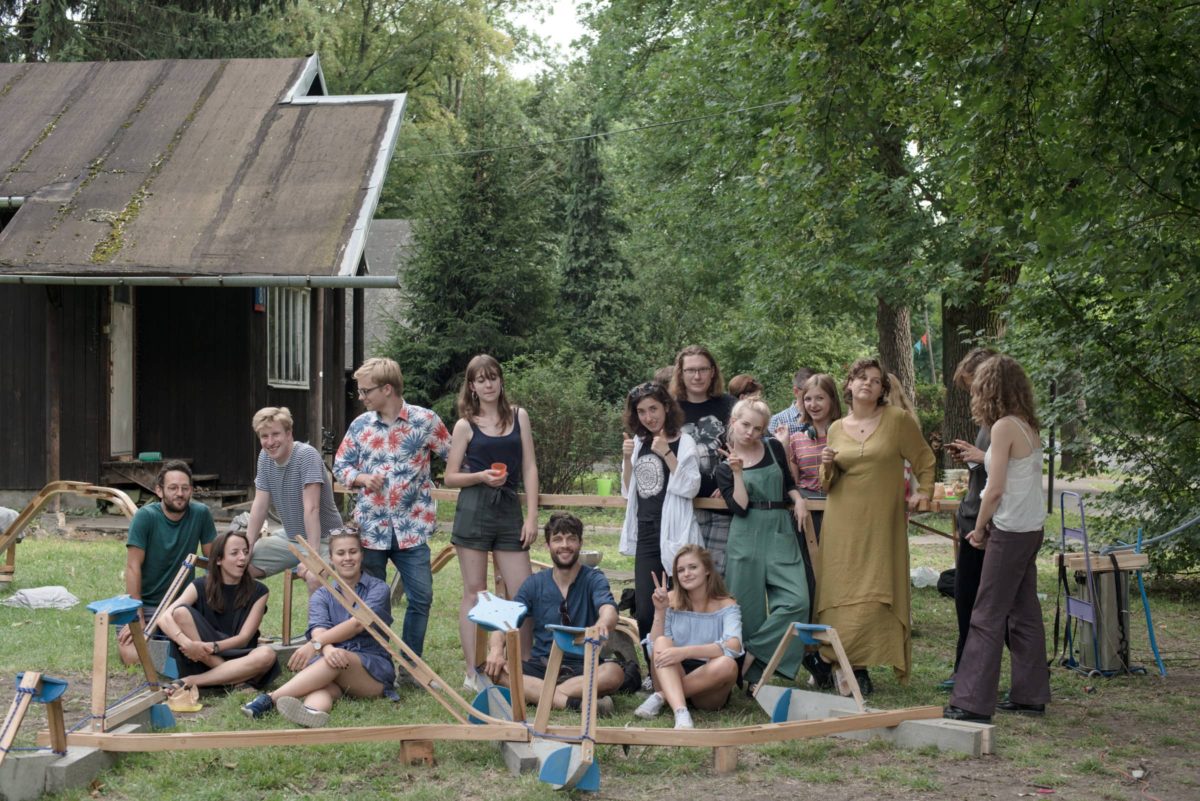 The Jazdow community is an extraordinary network of intimate, informal green spaces in the heart of Warsaw, framed by a collection of cabins inhabited by a wide NGO’s and a handful of residents. Originally built to house architects and engineers during the city’s postwar reconstruction, these cabins and their gardens now support a wealth of publicly accessible cultural activity. Yet many Warsovians, and even those walking through the surrounding Ujazdowski Park, remain unaware of the vital and verdant landscape in their midst. Students of our Warsaw Summer School were challenged this year to use techniques of play to draw passers-by to linger, wander into the Jazdow and engage with its cultural programme. Working for the second consecutive summer with Otwarta Pracownia, an open access workspace in the Jazdow community, students designed and constructed their installation together over the course of two weeks.

As an introduction to the Jazdow, students worked in pairs to develop a series of games for site investigation. Playful techniques helped to open eyes and ears to the unexpected, and encouraged a closer examination of the site’s deeper corners and unique quirks, its patterns and essential character.

Following the emergence of a set of rules for each game, students were tasked with developing a tool to enhance or facilitate these site investigation techniques. This exercise doubled as an introduction to steam bending timber. By first soaking, and then steaming lengths of timber in a purpose built chamber, students were able to bend and twist a range of prototypical implements. In the process, careful observation of variables – soaking time, steaming time, timber thickness, tightness of curve, clamping technique, jig construction – allowed us to hone a reliable methodology, while suggesting the formal possibilities for the final installation.

Synthesising observations and themes from their site investigations, students began to explore ideas for the final installation through 1:1 tests. By drawing people in through playful activity, designs aimed to engage, surprise and subtly shift perception. In the ‘follow the kerb’ game, it was noted that the precariousness of the footing sensitised the body to the particular topography of the site. Balance became a key theme, explored through the proposition of new ‘kerb’ routes into the site, as well as the creation of seats linked in tension. Here, balance not only encourages a more

intimate relationship with site, but encourages social activity: the seats require two people to sit at once, held in tension by one another’s weight.

In developing site-specific proposals, students were challenged to integrate play techniques from site games, but also to consider the making process as intimately linked with the spectacle of the closing event. A hybrid scheme combining balancing beams to draw passersby on adventurous routes into a site adjacent to an vacant cabin. Interlinked tension seats provide moments for more social play along the route. The site arrangement and an entrance portal offer the opportunity for anamorphic play, highlighting key elements of the unique architecture of the Jazdow and drawing the eye ever deeper in. At the centre of the assemblage, a rank of timber steamers are used – for one night only – to serve a steamed feast. Developed through collaborative drawing and modelling, designs were presented in to a critique panel including Akademeia teaching staff and members of Otwarta Pracownia.

In the lush green context of the park, and surrounded by trees, new concrete foundations for the installation were not appropriate. For stability, security and longevity, the installation would require pre-cast concrete anchors. Working with steel mesh and glass fibre reinforcement, we cast a set of three different elements: rocking bases for our tension seats, anchors to receive chairs at their interface with the balancing beams, and taller freestanding anchors for the beam.

Experimentation through early prototyping led to the selection of ash as the most viable timber for the balancing beam. A resilient hardwood, knot-free and relatively easy to bend once steamed, ash would combine strength and longevity while allowing ambitious forms. A set of jigs formed of stacked plywood sections on a palette base were used to define the curves for three standard modules, to be repeated and assembled to create multiple, meandering balancing beams. To create solid linear members resistant to twisting, curved sections of ash were doubled, sandwiched apart by further hardwood blocks and dowel jointed through. Finally, a coat of clear oil adds weather resistance.

After a week of construction, largely around the corner from the site at Otwarta Pracownia, the installation of our concrete and timber playscape was celebrated with a steam-powered feast. In the foreground, a double-barrelled steamer completed a forced perspective aligned with the window of the derelict cabin behind, drawing the eye to the idiosyncrasies of the Jazdow’s architecture. A pulley system was used to pull trays of bread, fish and dumplings out of the steamers, while elaborate mechanical spectacles announced that food was ready. Concrete anchors were cast to accommodate the balancing beams in two distinct arrangements. For the opening event, beams arched high to form narrow tables for resting glasses and parcels of food. Turned later on their side, these curves form a sinuous low rail for walking along. Facing across these ‘tables’, pairs of linked rocking seats draw diners into a tentative game of balance. While the steamers were initially cleared away after the feast, the intention is that these rails should form part of an enduring playscape, drawing passers by through the park and into the unexpected pleasures of the Jazdow world.