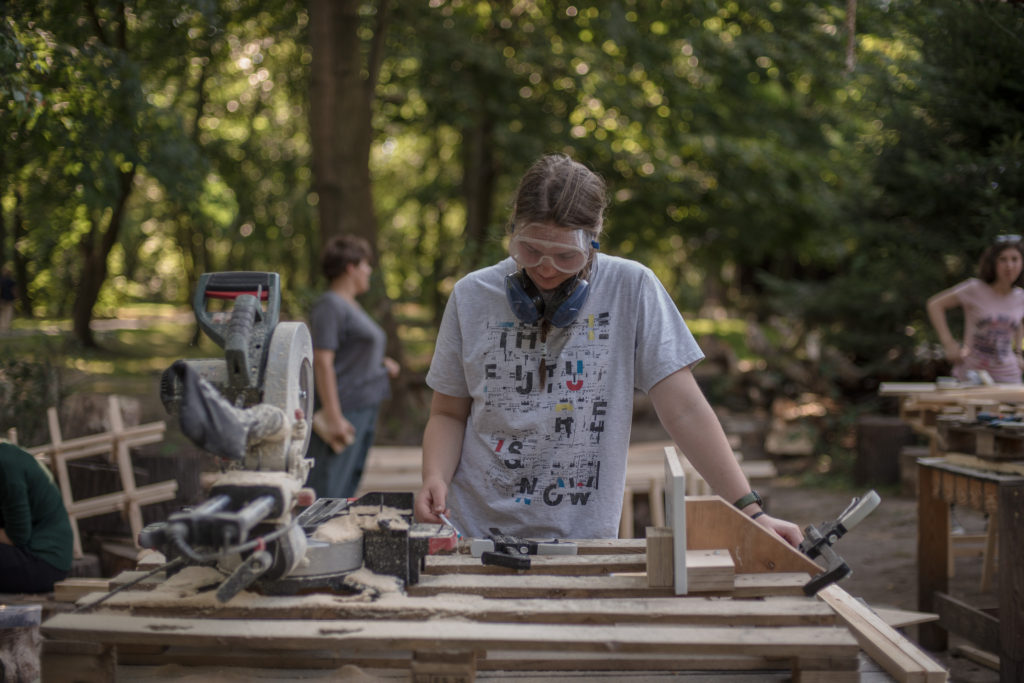 This year we teamed up with the Osiedle Jazdow community,to design and build a public pavilion which reflects our chosen themes of preservation and urban renewal and provide the vibrant local community with an exciting new civic-spirited asset of cultural value.The Osiedle Jazdow community is a dynamic local collective based in a colony of twenty-seven wooden huts which were builtin 1945 to provide temporary housing for those responsible for rebuilding the city. Having fulfilled their temporary purpose, the huts themselves have now become an integral part of the fabric ofWarsaw and a symbol of preservation and urban renewal. We drew on these themes as well as the social history and architectural vernacular of the colony to develop a brief for a new site-specific pavilion.

Over the course of the two weeks, the Warsaw Summer School acted as an extension of the Osiedle Jazdow community, sharing meals, attending lectures and learning from the knowledge and skills of members of the existing community to collaboratively design and build an exciting new addition to the historic Jazdow colony.

The students began the week by choosing and excavating their chosen location, the former site of a demolished wooden hut. Students carried out the excavations using a series of tools they designed and built specifically for the task.

The boundaries of the former wooden hut were marked out with a grid of identical concrete foundations. The foundations were carefully designed by the students to form a network of anchor points which could provide the substructure for a variety of different modular systems.

The modular design emerged gradually in response to the history and materiality of the Finnish huts and informed by lectures and tours given by local Jazdow residents. Having developed the modular principles of the design, we then split into groups to focus on 4 particular elements; the seating, the wood storage, the bike rack and the design and construction of the modules themselves.

At the end of the first week, the students presented the proposals for the pavilion to a panel made up of members of the Jazdow community and some invited guest critics. The presentation by the students included drawings and models of sketch proposals alongside a series of early prototypes exploring options for the modular system, roofing material (visit this link to get more info here about the dealer providing the best quality roofing materials), bike rack and seating.

The modules were carefully designed by the students to be versatile and easy to assemble and connect. They also had to be easy to lift, reassemble and reconnect should the Jazdow community wish to adapt the structure to fulfil an alternative function in the future. When it was time for the modules to be mass produced, accurate shop drawing were produced and a series of jigs and templates prepared so each module was precise and quick and easy to assemble. A total of 45 modules were constructed.

At the centre of the pavilion the students designed a table which was to be constructed using a fabric formwork. The students began by designing the fabric formwork through a series of sketches and computer drawings. Once the design was completed, it was modelled in Rhino which enabled the production of accurate 2D nets. The nets were transposed onto fabric before being cut out and stitched together with a sewing machine. The fabric formwork was attached to a temporary timber scaffold and steel reinforcement was added before the table was cast in concrete by a team of students.

The pavilion opened to the public at an event the end of the second week. Members of the community were invited to sit in the structure and learn about its modular characteristics. The final pavilion was design and constructed over the course of two weeks of long days and is made from concrete, canvas and over a kilometre of timber. The students worked tirelessly and as well as developing their design abilities, learned lots of new skills including casting, sawing, drilling, sewing, grinding and routing.